In Austria’s environs, built by an eagle, 1)
Like a hiding place, for the untamed forest:
Where Galatea praised by uler’s wise interpreters, 2)
Seems like a miracle to all sorts of peoples.
So the variable moon for the sunlight
Retracts her horns, which go down shivering.
Come Amstel nymphs, now braid palms and laurels,
To generously decorate shrewd Galatea.
All the forest got ears when the land’s noble heart
Captured the last musical price on a pipe, while the echo
Spread itself through the air and woke Russia’s lads,
Who at the winter hearth continued sleeping inattentively,
As if they were unaware of how shrewd Galatea,
The joy of our spot, their alert leader 3) cut
From unembellished material, come from Groenborst, 4)
Which puts mother of pearl to shame, and Indus’ golden banks.
He who protected the Tanaïs from violence,
And on Meotis’ lake received the name of hero,
When on Alcides’ trail, with his strong hands

He struck a more cruel Hydra, the dread of sea and beaches:
Where Mecca’s half moon, denuded of her ornament,
Called out to Nereus in vain, at the height of danger:
That undefeated head, so stately on his members,
Is now by her cutting shears worshipped by art lovers,
In the snow-white cloak, 1) prepared by flower maid.
Thus he sang, who passed his time in working the fields.
Come, Amstel nymphs, now braid palms and laurels,
To generously decorate the shrewd Galatea.
Last I heard Zegemond, a lad from Overzee,
While singing along the field, while his luxuriant cattle
Graze in clover meadows, show up at fresh streams,
How Galatea the flower of Frisoo’s literary heroes, 2)
Apollos’s secret interpreter and faithful diviner,
Captured after life, and cut with her sharpened scissors,
In lowly leafs, 3) now rich in fame and lustre,
For which Cerberus shakes, while he in the dark
Hides with Pluto, at the waving of the hand,
Which crushed Circe’s magic in the sand,

While now Galatea, from white tree bark, 1)
Cuts a harvest of sayings, where Leezaard, without restraint,
Sates his eager lust and entertains in style:
Where this cut writing differ little from gold.
Come Amstel nymphs, now braid palms and laurels
To generously decorate shrewd Galatea.
The field pipe of Landroemer sounded with this right on the beat;
With joy I think of the pleasant day,
When wise Waarmond, 2) everywhere here by peace-loving hosts
Worshipped respectfully, as the head of the sacrificers,
Of the great oracle choir, which shrewd Esculapus,
Who commands all around, and pointed me, a poor lad,
To the dark paths, where snakes hide out,
So as not to wander in Volkert’s footsteps, in the wild forest;
How does that glad day always please my senses!
When it was eternalized by Amstel’s art heroin;
Where he, in inferior cloth, from rags 3) gathered together,
Amazes the boldest brain with his cut out being.


--------
1) This also referes to paper, since in olden days people were wont to write on it.
2) Galenus Abrahamsz. de Haan, the Mennonite teacher and medical doctor.
3) Linnen rags from which to make paper.

People no longer praise artists for their learned understanding,
Now that the weakest cutting tool 1) of a woman takes the crown,
Come, Amstel nymphs, braid palms and laurels,
To generously decorate shrewd Galatea.
I urged their lust for song on to the rustling of the sea,
Minerva does not exert herself since she, armed
With helmet and spear and shield sits happily with hero Cosimo, 2)
Held together with threads, 3) once melted on the field
Whoever saw lady Pallas with greater cleverness,
Than now, by Galatea so artfully cut out?
Arachne even doomed her reckless trust,
Could she, altered, now only once see the outstanding image,
And spoke for all, relieved of pride’s vain illusion,
It is done with Thebe, with Amphion it is done,
Apelles’ painter crown lies downtrodden in the dust,
My spinning has stopped, my thread is cut off,
An art heroine braves Minerva’s school on the Y;
While her rich spirit strives past all others.

Come, Amstel nymphs, braid palms and laurels,
To decorate shrewd Galatea generously.
The grey Tiber hears, in the deepest of his chill,
Woken full of cheer, where he tranquilly and quietly
Restrains its waves, Fame thus arisen:
How somewhere in a spot, 1) in Waterland regions,
Where Y and Amstel streams, continue together
The shrewd are heroine, from dry and white leaves, 2)
The six pairs of tribes of the ancient Tiber counsels,
Dedicated to Jupiter, of worn-down threads, 4)
Gave outstanding light, much more beautiful than crystal,
Freed by fate by the unstable event:
Like the Keurtelg, 5) who raised on the Elbe stream,
Receives from Galatea an imperishable life,
Where he praises the art scissors and the female intellect,
Which all the kingdom of goddesses stupefies in its secret,
And now the mountain of song compels, with elevated strings
To sing her praise, while a stack of leaves, 6)

From 1 Phoebus alert row, 1 bespattered with Pindus’ moisture,
Come Amstel nymphs, now braid palms and laurels,
To decorate shrewd Galatea forever.
Thus warbled Coridan until the day sank,
And the light of dusk again shone in Boötes’ robe.
Then he gathered the cattle and the stray sheep,
To seek her sweet rest in a soft cage;
While he in his hut, departed from the field,
Tells his family around his hearth about Galatea.
1 In which the poets wrote their verses.

The oil of her life's lamp having been consumed by its flame, ceased to shine on the 28th of December of the year 1715. Her body, but not her fame and portrait, were sealed in her grave. Katharina Lescaille composed the following caption to her [commemorative] Print [1] :

Honour this Portrait, whose spirit and Scissors could create miracles
Recreating invaluable art depictions in paper.

Mister Blok, who preserves her memory in all honour, does not allow her fame as artist to be neglected. On the contrary, he has assembled the names and sayings committed to paper by the very hands of world rulers (in remembrance of having seen her famous scissor art), 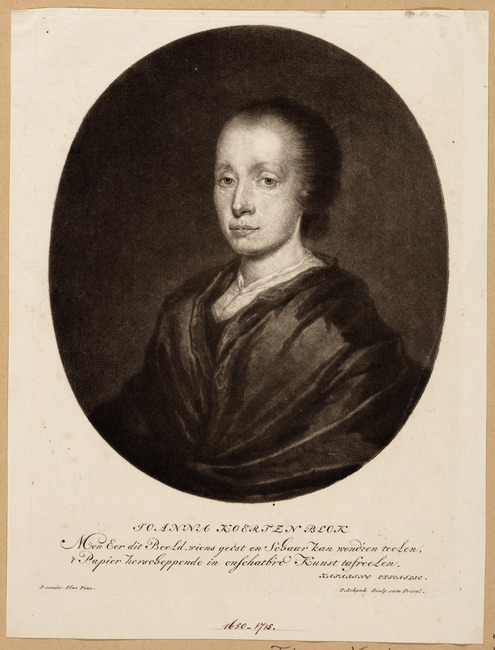 as well as the verses of great poets, to be displayed in a genealogical register, and has their portraits drawn by a skilful hand to be placed opposite the texts. He also has the best artists make drawings referring to mentioned sayings, which serve to delight him in his spare hours because of her knowledge of religion and commendable deeds, in which she excelled above all her arts.

The commemorative dirge, celebrated by Mister David van Hoogstraten is included in the following funeral song.

Her portrait is based on the painting by DAVID van der PLAS [1], as is seen on the following sheet, opposite this verse, which flowed from my pen for the viewers of the print:

The art of engraving painted through the steel
Of the woman’s crown, adornment and splendour,
Johanna Koerten’s commendable face,
Praised by everyone for her intellect,
From the copper, who with the scissors
Precisely captured after the model,
And had many rulers live eternally.
By which she is radiantly elevated.
Listen to how the bright fame trumpet,
Drones her scissor fame over sea and dunes
So that everyone must speak in her praise.
This print provides a sign of honour.
Here the silver clarion holds
The scissors crowned in the blazon,
One sees it sway back and forth.
And blow to triumph of the cutting art.
The fleetly winged Fame also adds
A shining honorary crown to her name,
Thus to decorate the firmament,
To the glory of the art papers,
And that this lodestar may steadily
Shine as if in broad daylight
Did death then envy this lustre
And had her body move to the dark
Covered with a gravestone
That hand which created so much praise;
And if the mortal part has perished;
Her fame lives on in spite of death.

ROCHUS van VEEN, son of Otto van Veen or, as others would have it, his brother’s son, also practiced art but mostly with water colours on paper or parchment. He had two sons, of which the elder practiced only the art of the brush. They lived in Beverwijk, where they lived quietly and peacefully, only enjoying the painting of the sweet activities of all kinds of animals and birds after life and in colours in the manner of Pieter Holsteyn II, only more detailed. The drawings, paintings and prints that they left were sold in Haarlem in the year 1706 [= 1709?], after the last of the artist family had descended in the grave.

At that time was also alive and in flower DIRCK van DELEN, born in Heusden, whose intellect and inventions, treatment of the brush and experience with the painting of buildings and recessions are especially praised by Cornelis de Bie. He was a student of Frans Hals. Having reached maturity, he moved his household to Armuiden in Zeeland, where he became burgomaster.

Also alive in Dordrecht at that time was ABRAHAM de HEUSCH. He was born in Utrecht but married in Dordrecht, where he continued to live. He had learned art with Christiaen Striep and painted all kinds of herbs and with them lizards, snakes and butterflies, very naturally and elaborately. In his widower’s state he first served as lieutenant and later as captain of a fire ship at sea. Married a second time, he moved his household to Leerdam, where he quietly lived off his interest and died as burgomaster of that place.

Our site saves small pieces of text information (cookies) on your device in order to deliver better content and for statistical purposes. You can disable the usage of cookies by changing the settings of your browser. By browsing our website without changing the browser settings you grant us permission to store that information on your device.
I agree